The butcher, the baker and the candlestick maker… 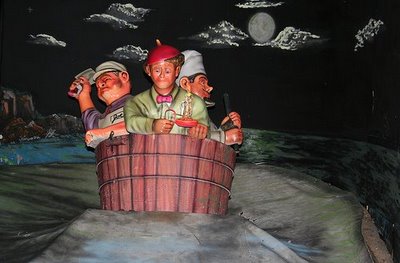 The butcher, the baker and the candlestick-maker – or in this case, the educator, the shop owner, the mechanic and the know-it-all – were in discussion at the recent UK CIO 100 event.

(As an aside no one has worked out what a collective noun for CIOs is, although suggestions have included a ‘wally’ of CIOs and an ‘agenda’ of CIOs!)

As a group we were discussing whether a CIO of mechanics in the manufacturing industry can become a CIO in the health sector, primarily dealing with patients, doctors and nurses? My starting point was absolutely yes, be aware of the learning curve in doing so, but every CIO starts the response with the idiosyncrasies of their industry. “Yeah sorry, we are a complicated organisation, what it really means is…” they say, and therefore the learning curve is universal.

At the CIO 100 event we also heard how certain themes are the focus of so many CIO minds at the moment, when thought leaders speak and so many people sit and sagely nod you know that you have a group of people in the room who are ‘like minded’.

Or are they? My entire tenure as a CIO has been in the health sector. Is that because I am appropriately skilled for that arena or because I am worried about which side my toast will land on if I move out of my comfort zone? The group of CIOs were convinced that the CIO skill set is transferable, and yet the definition of what that skill set is was considered to be different dependent on the market area and the culture of the organisation.

So as a group this was pondered for a little while, very much from a positive point of view. We all wanted to do a job swap for a week at one point just to understand the differences. Key messages that came through though were:

Everyone wants to innovate – If an organisation has invested in the concept of a CIO then they are likely to be doing so because they need to utilise the disruption of information systems and technology to alter the business in some way, i.e. the power to innovate and manage innovation is a core competency.

Influencing up, down and sideways is essential – The ability to see the message at all levels and then influence its delivery is essential. The CIO role is as a friendly manager, stiff message deliverer, honest broker and executive, often all at the same time.

Translation of focus from technology to benefits – The CIO’s skill of technical balance is essential to success. A CIO needs to be excited by technology but not blind to benefits, simply wanting the new shiny thing will not deliver benefits.

Responsibility – The organisation wants a ‘go-to’ face for all things thrown in the bucket as technology: information, data, mobile, digitisation and a plethora of new exciting words that were picked up in a conversation that now need to be looked at.

So, taking the initial nursery rhyme analogy a little further, if our group CIOs were all in a tub and were about to set out to sea, what did that group think was the single skill that would keep the tub a float. The conversation seemed to lead us to that the key skills really all fall under one overarching banner, LEADERSHIP. The key skill that is both transferable and allows the CIO to be transferred, is the quality of the leadership.

In so many ways many of the examples above are simple subsets of leadership. They are skill sets that are transferable, it’s the context and relationships that need to be picked up, when, as a CIO the person moves from retail to health to automotive and still has to keep the tub afloat.

By the end of the evening we came to the conclusion that the transfer from one CIO role to another could be even easier with a community of support, and therefore if we all really were in a tub together about to set out to sea and between us we would know the life skills needed to get it to land again!