NYC, we love you… 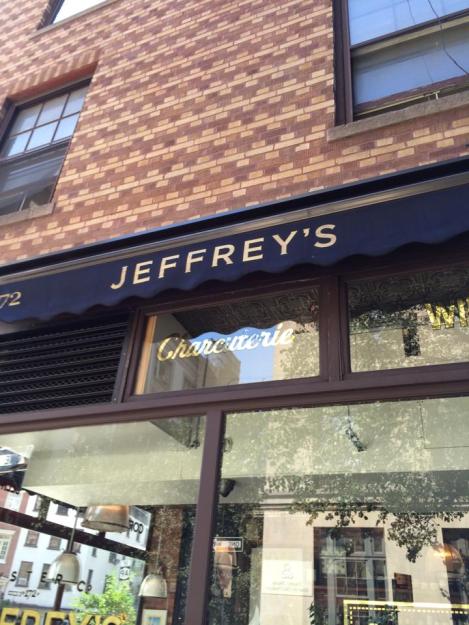 In the words of them there Beastie Boys, ‘Brooklyn, Bronx, Queens and Staten, From the Battery to the top of Manhattan, Asian, Middle-Eastern and Latin, Black, White, New York you make it happen.’

I had a limited amount of time on this visit but it still was going to feel like I visited the world in one city. On a Friday afternoon the learning finished and I decided I needed to get some fresh air, so I set off across Wall St. first stop NYSE, decorated in bright orange for the Alibaba IPO, quite something to think that such a huge Chinese institution has simply become part of the way that the USA builds economic advancement. After that I had a plan in mind, walk up Broadway to SoHo and then on to Greenwich Village for three key reasons; Jeffrey’s Grocery Store, The Three Lives and Company bookstore and Washington Square Park. The whole area around here has become so special to me, I wanted my afternoon to be about the walk down Manhattan after visiting the places that mean the most to me, so made an effort to get up there with the least fuss.

But this is NYC, you can’t do anything without a bit of fuss and razzmatazz!

Seeing two characters form Legally Blond, dogs, handbags the works was funny, hearing the argument about what an artist is in the USA was simply eye opening and watching the taxis come so close to an RTA at every junction kept me concentrated! But that is New York isn’t it.

The trip from downtown to the village was fun, and as usual for me in NYC caused a little bit of meandering as the roads stop being grids and the odd diagonal addition drops in! The first objective was achieved. Three Lives and Company has been in New York since 1968. In my mind it is the absolute definition of an independent bookstore. There is an urban myth that you can take a test at Three Lives, the enthusiast behind the counter (and there is no other word for the team that work here!) will recommend you a book by asking you your three favourite words. I have never been brave enough to ask myself, but imagine that, money back guarantee if you don’t like the book they find for you based on three words. The store smells like a bookstore should, if it was cologne I would want it for my living room. Books in the USA feel better; look better and so far read better, why? In my mind it’s the independence that exists, Richard and Judy’s book of the week may well have got more people reading but similar to the demise of the record store, it has stopped people browsing and experimenting. Places like Three Lives foster the desire to try something new, and this from a man who has been there every time I have been to NYC, so clearly there is no limit to the new things to try.

Next on the list before the wander really starts is Jeffrey’s. For me a ‘Blue Plate’ place in my life. The first place I ate Oysters, the first place I went to in NYC after work and the most comfortable bar-fly seats in the world! As you can tell, it’s actually not a groceries store, although it would seem you can have the special cocktail mixers made as take away, which is pretty damn cool. Every time I have been to Jeffrey’s the staff have made it exceptional, there I am on my own, corner of the bar seat able to watch a talent deliver a service better than anyone else I have ever seen do it. It seems to attract a local crowd who know the team who work there, a simple food menu all very fresh and an oyster menu that changes daily. The team at Jeffery’s will recommend you an oyster based on how experimental you want to be and the descriptions of each different type are worthy of a Pulitzer in their own right.

‘The problem with some people is when they are not drunk they are sober.’ – William Butler Yeates.

This is the lead line on the drinks list, a comprehensive attempt to capture drinks that go with the food and ask the customer to experiment a little. I guess I fall out of this demographic as I go for the same wine I have had the last two times I have been here, a little Greek number that is just the right side of sharp with the oysters.

So, by this point my mind is expanded, my taste buds tingling and its time to go feel a little bit of culture. Washington Square Park for me is the best small park in the city. It is surrounded by University buildings and therefore attracts a different crowd on a sunny day. Dancers stretching out on the top of the gate, student filmmakers set up a scene for a project, two sparing rappers and a beat-box are entertaining a large crowd, a hill-billy cowboy group just performing for laughs and the live Chinese karaoke band! All of this in a park no bigger than Tavistock Square in London! But perhaps the best part of the park is the art, all of the paths through the park have chalk drawings all over them, created daily showing news stories or things that have happened in the park or even requests, quite simply beautiful!

So this then is me done for my three special venues, I begin the walk back through SoHo and Little Italy, little did I know that it was a special day on my visit. The feast of San Gennaro closes the largest part of Little Italy to traffic and the roads become a street fair, food, drink, cigars and sounds of Italy in the City. Even the walk back to lower Manhattan ended up being an adventure of taste, sound and noise that only this city can deliver. No where in the world is this diverse.

So to conclude with words form the same Beastie Boys song, ‘Brownstones, water towers, trees, skyscrapers, Writers, prize fighters and Wall Street traders, We come together on the subway cars, Diversity unified, whoever you are.’