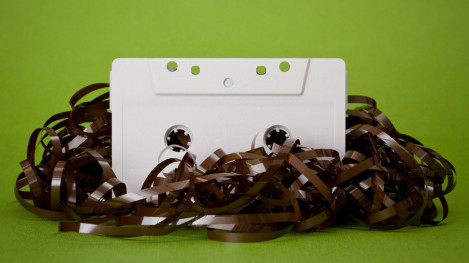 At the moment, whether it’s conference season or just a significant up turn in interest for what we do, I find myself living in Power Point. I even dreamt in Power Point the other night!

I presented at a life sciences industry conference last week and made a significant mistake, I got to the end of my slides and realised that I had, in my enthusiasm for the subject, forgot to do a slide that summarised what I had said, something to make it real again and bring it all back to the beginning, school boy error was the feedback from our communications team.

I needed to relearn that lesson pretty sharpish so decided to start attacking all new slides sets as I would have attacked the creation of a ‘mix tape’ in the 1990s.

The beauty of the creation of a ‘mix tape’ was always about creating the journey for me, some of the ‘mix tapes’ in my group of friends in the 90s I would consider works of art, ironic titles, best handwriting on the covers and most importantly a selection of music that took the listener on a journey. It was the 1990s after all.

So, using this as a starting point I started to write myself some presentation rules using the ‘mix tape’ analogy to ensure I never made the same mistakes again. These rules then;

One – Start with something slow and meaningful that sets the tone for the rest of the ‘mix tape’. In other words set the scene, which is the perfect rule for the presentation. My new rule is to try to ask a question or put forward a premise to be proven or not. Putting a premise up and then proving it isn’t the case is surprisingly powerful. By doing this though the presentation has an anchor to come back to. Part of me wonders though if sometimes that anchor is simply a good way of indicating the end of the impart of information is neigh and the audience can get ready for the sport of question asking.

One of my favourite ‘mix tape’ tricks was to get a bit of film dialogue from soundtrack albums or a slow burning remix and put that on as the first track. Recently I have used a short snap video clip early in a presentation, and again that seems to really engage. I am coming to the conclusion that, audience dependant, if you want to use a “gimmick” (a negative word but in this case a positive outcome) then this is the time to use it.

Two – The second and third song has to be of quick tempo or known already by the audience to keep the attention. With the presentation, the next two major points you make are key, what were the two major messages you wanted to get across, get them out, even if it’s a summary of them, and get them out clearly. Recently we elaborated on the Information Systems we have through the use of a periodic table graphic, making our system acronyms appear in the periodic table. Nothing is better for a presenter than a gasp of appreciation form the audience, and that’s what we got the first time we used this graphic! Whilst a complex first message this seems to go down well, and much to the horror of my office team I want to do more of this.

Three – Then it’s the elaboration, when the ‘mix tape’ was a gift I always thought the C60 worked better than the C90 as it was a more succinct message.  With the presentation I try to use the same theory. On a recent trip with UK TI to the States they said that every slide deck that gets sent over from the UK immediately gets halved in length for the American market, so I am now going to try to do that (Before I send them to the UK TI). However the message in this is clear, number of slides is equal in size to lack of confidence in the subject. I keep trying to move to a no slides conversation and keep falling back to my need for the slide deck, sometimes that’s for the message but sometimes it’s the comfort blanket of support, I will keep trying because on the receiving end of this it really is great.

Four – Halfway through the C60, with all the timing right you had to hit with a meaningful song, something that makes the listener turn over! I believe that’s half way through the presentation, stop, re-iterate (and in the immortal words of Vanilla Ice, “collaborate and listen”). If nothing else at this point take a breath, think of the silly things you have said because you have the rest of the presentation to fix them! Recently we have been doing 45 minute presentations (on paper). Halfway through is not the maths halfway through, its 10 minutes before the end!

Five – The second half must be as good as the first half!  And consider the point above, half way through a presentation is not based in time, it’s in information imparted and information sucked in, and therefore your audience has about 1/6 of the presentation left now!

Six – The second side mustn’t have songs by the same artist but must follow the tempo set of the first side of the tape. Even though it’s not a mathematical half I still use the same tempo for the first half. Keep new messages fresh but shorter, and show the links to the first half. The theme needs to repeat and the links need to be there.

Seven – There is something about the wrapper though, the ‘mix tape’ always had your best writing, and you tried so hard not to make a mistake. In a similar way think about what you are wearing. I was told light blue shirt dark tie on a big stage, but, in the States, go British, play up to the character you are, the emphasis needs to be this is me, with bells on. My wife giggles whenever I have a ‘big’ presentation, she knows straight away, one of the best shirts comes out and I spend more than I should picking my tie! But, if you feel good from it then you will perform in character. I know that sounds like a Marie Clare advert but it’s true!

The end – So lesson learnt, now the wrap up! I love making ‘mix tapes’ even today, the end of the year mix is something I start on the second of January and commit to ‘tape’ on New Years Eve. I really enjoy presenting too, in the very late 90s I arrived in Leeds for a presentation, this was straight after Christmas, my boss of the time had a new guitar for Christmas, he went on stage and promptly played a riff from his guitar and hollered “Hello Leeds!” Imagine following that with your first presentation over 100 people! Ever since I have enjoyed trying different ways of getting information about the work I do to an interested audience.

Ultimately, presenting for me is me exposing my passion for what I do, it’s probably me wanting to impart that passion in reality. Everyone has a style though, use your style, some people are just bonkers on stage, some people try to be comedians, some are Churchill-esque in their desire, I think it is about picking a style and going for it, be the character of the current ‘mix tape’ stick to it and enjoy the delivery.