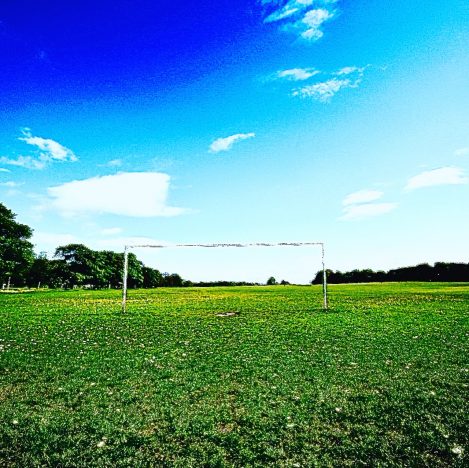 Once a shared centre of attention,
now a little alone,
not as pure in its intention,
to deliver the difference to make a win or to cause a loss.

Twenty four by eight,
and yet here it stands, here alone; twenty four by seven,
today sharing the field with no other, where overseeing battles, loves, loss and determination,
where its previous intention all season long.

A new goal is now aimed for every day,
to once again allow the six and the eighteen to be white on green,
to allow those lines to be the judgement lines for hands, feet, hearts and heads,
when can we remake our goal, their goal, every goal again.

That tired and tried and rusty twenty four by eight,
will once again become the trusty strength of white against blue shining sky,
squared lines on green that smell fresh and meaningful every day,
to all eleven, to all twenty two, to the nations ready to have a new goal again.

My goal will come back, like everyone around the world we should appreicate that twenty four by eight a whole lot more…

they pitch two bushes in the ground, some eight or ten foote asunder; and directly against them, ten or twelue score off, other twayne in like distance, which they terme their Goales.

#Poem3 A lockdown memoir to the game, the fields, the jumpers for goal posts and the changed world that will be different for everything, not a new normal, a new different with an evolved goal for all.

Photograph by me in sunny Roundhay Park in Leeds in May 2020 on my one government endorsed piece of exercise.