Why were we friends then… 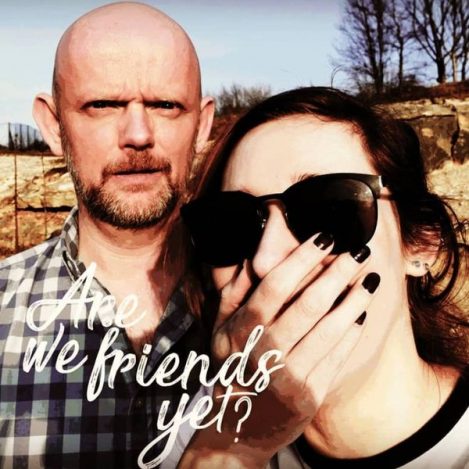 My oldest and dearest friend is a cultural rock for me and always has been, and oddly it turns out he didn’t ever (or even) realise until just the other day! Mr. Rockley created taste in so many of his peers in that short sharp shock period of our lives, the coming of age years, 1990 to 1992. Mr. Rockley is now the co-host of a Podcast called Are We Friends Yet, the premise of which is can two people build a strong friendship when their tastes are somewhat diametrically opposed and indeed can they bring new taste by simply persuading the ‘other’ to give something new and different a go! Mr. Rockley, the taste ‘pusher man’!

Those most formative years for Mr. Rockley and I included; Hillsborough, the verge of (and actual)  recession, John Major as leader of the conservatives (and then the country), the publiation of the  Satanic Verses, Emma Watson being born, the Gulf War, the internet came to life, the Channel Tunnel connected, Terry Waite released, shops began opening on Sundays, 2.5 million people were unemployed, Freddie Mercury died, AIDS doubled in its impact on heterosexual males, the end of Polytechnics, the first ever ‘rave’ festival was held, Black Wednesday and the suspension of the UK membership of the exchange rate mechanism, the Amiga 2000 became the most popular home computer, Women priests became legal, and Frankie Howard died… A lot happened to set the context, but those formative years are not built from this kind of stuff happening really (are they), those years are built from seeing, hearing and reading, well that’s what we thought!

School, or rather sixth form college, in the very early 90s was a great place to be; the Madchester revolution, a resurgence in film making as art as well as entertainment, superb new literature to dive into and all in backwater Nottinghamshire where we were being educated. We were open to a width of taste that Mr. Rockley in particular was instrumental in the curation of.

The early 90s still ingrained a tribalistic nature based on taste in to the teenagers of the day. You were a heavy metal headbanger, a dance music bass head, a Smiths loving indie kid, a pop-tart, an artistic trash can Sinatra, a floppy haired Madchester kid ‘avin it large or, well there were so many tribes, but you were part of one of them unless Mr. Rockley was able to educate you in the ‘error’ of your ways. What he did was ahead of its time, it is only now that what Mr. Rockley did can be considered a truism of what digital consumption  has done to us all. He persuaded our group of friends that you liked what you liked as long as it was really what you liked!

Mr. Rockley gave the gift of a compilation tape quite often, every one of these was entitled ‘See Inlay Card For Details’ a nod to the fact that the theme of the compilation was its contents and not a genre. These tapes nearly always started with a piece of music from a film, or a cut piece of dialogue, whether it was an Ennio Morricone spaghetti classic or simply the opening bars of some incidental music from Twin Peaks (which by this point was ingrained in us as our cultural ‘meeting point’). Mr. Rockley knew how to grab attention, create a journey in two sub sets of 45 minutes that would have a warm blanket of the known, a push towards something different and always something quite unexpected that would stretch the aural acceptance ever so slightly.

John and I recently caught up over a lovely meal in our old stomping ground in sunny Nottingham, in Hockley at the Larder on Goose Gate (which I cannot recommend enough I hasten to add). Over dinner (and wine for me) we remembered the world we came from. And then the moment happened when I explained to John the importance of his width in music taste in particular how it formed a bunch of kids and helped them become rounded adults. My formative years were more open because of the taste that my friend imparted upon me, in ways that other people I have met since never had. I believe that taste forms attitude, or rather the acceptance of taste and the connections certain tastes can make create your culture which in turn influences who you become. I tried out Prince obsessive, indie kid, dance music bass head and Acid Jazz-er over the years but always came back to the fact that I didn’t need to be in a tribe, I could simply like what I liked. Don’t get me wrong I had a whole period of my life where I listened to nothing but the darkest most melancholy music, and that tribe didn’t bring me down, in fact I think that tribe saved my life once or twice, but now acceptance of nearly any music at all makes me tribe-less other than now-a-days where there seems to be a tribe that actually listens to music rather than watching Tik-Tok or Fortnite.

That interests me a lot, how the ‘new’ tribes seem to be so much more about the medium of enjoyment and entertainment rather than the stylistics of what noise is made, computer games, sports fanatics, reading geeks and music heads are the new tribes. Possessions, the need to collect things seems to be ebbing away too, the experience of stuff is way more important now and this in turn is building new tribes that have had experiences.

John and I couldn’t get together though without trying to create the playlist of those years;

But what does this all mean, well it is interesting to note that whilst we thought we were very inclusive there is no Hip-Hop on there at all, and that’s odd because I know we loved the De La Soul, Jungle Brothers and Del the Funky Homosapien amongst others but they don’t make it into the quick brain dump of the songs we were listening to… Maybe we were a tribe after all!

Being of that age and at a sixth form where English was an A level of choice amongst many peers books became a big part of what we were becoming though. Often the books we fell for were the ones we were nudged to study, so for me; Graham Greene, Tom Wolfe, Iain Banks, F Scott Fitzgerald and anything about America were in my hands. Whereas others went for the classics, Pratchett, Hitch Hikers Guide etc… I don’t see books in the teenage tribes of now at all, and yet Waterstones and the independent book stores I visit seem to be doing ok. I hope the high street doesn’t begin to see the departure of the book store in the same way as the music store is almost gone.

1992 was the year that Men are from Mars and Women are from Venus was published, we all thought we were very grown up reading one copy of that between us all. The English Patient, Band of Brothers, All the Pretty Horses, The Virgin Suicides, Girl Interrupted, Trainspotting, Shipping News and Birdsong all made the library for us, no wonder we were head in a book when you list those top few, although notably not particularly full of laughter, coming of age was hard and fiction was another way of being sure that you were not the only ones finding it hard!

The one passion that Mr. Rockley brought to the ‘team’ that others didn’t was film. If you listen to the Podcast you can hear John wax lyrical about his love of the artistry of film, I worked in the local Video Shop, not quite Clerks I can assure you but Mr. Rockley did try so hard with successive managers of the shop to turn it into the store of his dreams, one that actually had Belly of an Architect, The Cook, the Thief, Sex Lies and Videotape and Wild at Heart on constant rotation. In reality Look Whose Talking Too was always going to be the highest earner in our little village!

But as with music the taste of our ‘pusher man’ in film rubbed off on nearly all of us to some degree. I now would list Wild at Heart in my top five films ever, at the time I had no idea what I had just seen. Hearing Blue Velvet in any situation transports me to the moment I first saw the film and I will never ever forget the moment in Silence of the Lambs when you realise that the Chris Isaak bit part is not Chris Isaak anymore. These moments all came from my cinematic education by my good friend!

What happened next though? Well we all fell out of each others orbit, we all took small parts of what we had learnt, experienced and seen and these things made us rounded and capable of living in the big bad world. We did good things, stupid things and followed our dreams. And now, when we reflect back on what we learnt during those most formative years we remember that taste is created together and has an impact on you forever.

I’m not saying we created good taste, but we learnt in our little bubble to be open, to try to not put things in filing systems and to try hard to be open minded, for me best represented by my clueless nature at my my first viewing of Wild At Heart as an 18 year old and yet still in love with the film nearly 30 years later! (OMG, 30 years later!)

At times this taste (and I stress again I am not saying good taste) has been what I have turned to so that I can be sure my feet stay on this planet. Reminiscing, remebering good times, making connections back to moments, all key to a Matt Haig Reasons To Stay Alive moment!

So, dear John, thanks for the effort you put into our gang, wherever they all are they are better for it, and to Flick, John’s co-host, crikey you have a hard job, but stick with it my dear because most of what he talks about is good, in the end!

For anyone wanting to know what happened to the musical taste next try this play list…  https://music.apple.com/gb/playlist/20-songs-ever/pl.u-MRzjJC3Z5y8m

JohnStephenMickPaulLindsayAmandaSamKarenEmmaAnnaGaryKaiRobertRichardDanielMaryZoeLucia …Andmanymore – The stories everyone of these names can tell…