What can you catch… 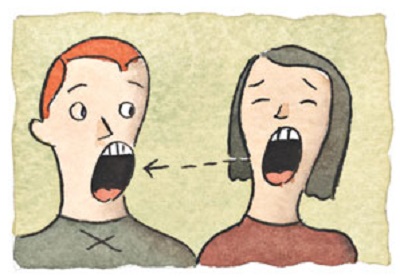 Do you yawn when you see someone else yawn? Do you even get a bit of a feeling of yawning now as you read about it? Ahhh yawn…

How can the thought of a yawn be catching? It is one of those suggestive and odd phenomena that I didn’t know the truth of until researching for this blog. It turns out it is ‘catching’ and that the power of suggestion whilst individual in reaction is almost impossible to resist!

Is mood catching too? Think back to a bad day at school or a ‘riot’ on a family holiday, it only took a prominent party member to get out of bed the wrong side and suddenly all hell would break loose. Being parents of more than one must be so hard; tasked with trying to make sure that humans wake up happy so that the world can be a calmer place, something that happens every morning as each eye opens and yet somehow a parent is responsible for that very first second of every day. How can a good mood be created?

So much has been captured in the last couple of years about the impact of sleep on mental health, and the science is there, but I think we need to consider the nature of collective mood just as much. The daily culture of small groups and the experiences that these bring I truly believe are just as impactful! But before we really get into that there is another thing that I think we need to be aware of on the road to good mental health…

Even what I eat effects my mood. I know that when I was doing A levels and at University that a bad mood, a glum mood, a mood where I was missing my friends could easily be resolved by a tube of smarties. I kid you not, it didn’t matter which colour, I ‘just’ took smarties as a happy pill. And they worked, I had several fillings because of it but they worked for me, and some of that time I was in the darkest of places.

For me maybe smarties did have the answer. It fascinates me though to think of the physiology of the body in that moment, the sparks lit by the right E numbers, sugar and caffeine were genuinely a saviour on more than one occasion. Once you learn what works its very easy though for it to become an addiction, particularly if you are a creature of habit, and I definitely am!

But back to the main thrust of this brain dump. Is mental health a communicable disease, is it contagious? I would suggest that good mental health is definitely catching, if you are around a bunch of happy people its much easier to be happy, to manage the negativity that runs through your head. When issues ‘land’ though its not possible to simply change the environment you are in, or is it?

Imagine a work situation, in a previous organisation I worked in we considered it best practice to use the very first slot on a Monday morning as the set up for the week ahead, it made sense, and for me as a leader in the organisation (and someone who springs out of bed with the first beep of the alarm clock) this as a great way to set up the week. But, with clinicians involved, sometimes teams whose concept of a weekend was very different to mine this worked only about 50% of the time, and if it didn’t work bang went the week ahead. Cross words at 08:15 on a Monday morning with a leadership team you then need to rely on for the rest of the week is never ever a good thing!

Picking the moment to connect and finding the right path to use for lots of people, including yourself, is hard. Is it all about timing, well it can’t be, you can’t align that many ‘internal clocks’ so it has to be about recognition of the internal workings of the people you are surrounded by! In the late 1990s I think the word empathy came into its own as a leadership skill. I think it has become an assumed skill now, but one I think we are wrong to assume continues to exist and be taught. In a modern world of digital connectivity empathy as a skill for engaging at a human level is dropping away. I hate to bring a north south divide (in the UK) into this but I also think that empathy is still stronger ‘up north’ than it is in the south.

Earlier last week was a great example, I was walking down Grosvenor Place, something of a building site at the moment, heading to an early meeting. Walking towards me a lady, say 50 years old, nose in her phone, no matter which way I went I couldn’t avoid her bumping into me. My reaction, to check she was ok, pick up her bag, check again she was ok. Her reaction, a sniff in the air and a muttering of ‘stupid kid’ (I am 45 years old by the way so this made my day!) The lack of empathy for the situation I think compounded by a number of reasons, firstly the digital obsession she was gripped by, secondly if anyone was bumping into her then it couldn’t possibly be her fault and lastly, an attitude of this is my footpath. Rebuilding empathy in people is going to be a challenge, but one I think we have to try to do and as a way to guard our own mental wellness and create a platform for us to redevelop a community of support. And I do believe that geography has an impact on how much empathy is shown.

The path way to a disease of the mind should be well sign posted so that it can be avoided. Emma Thompson used an analogy recently when talking about the differences in how gender is considered as an actor, comparing the male route as one of a motorway with all the junctions signposted and the right speeds indicated from the road side; she compared this to the female route, a new mountain path, trod just once before with only footsteps to follow. This analogy plays neatly to the diagnosis, identification and route to getting help when it comes to mental (un)health. But, if empathy was the support mechanism that every human being could rely on then the sign posts to staying healthy would be perpetually there, held up and lit up be friends, colleagues and family, maybe even strangers walking the streets of London!

I think we look to the past a great deal to find situations to create new empathy. There is a great podcast available at the moment called Are We Friends Yet that I think has this as a theme although not obliquely! Two friends with great cultural taste have come together in adult life and they are trying to test whether their diversity of taste in music, books and film enhances or detracts from their friendship. Full disclosure one of the podcasters is an old friend, mentor and general raconteur that I have followed since the age of 12 years old so I guess I fall into his way of thinking a lot. But it’s a really interesting hypothesis. And even more so when I overlay the empathy element on to this. Is empathy a learned skill, a skill we are born with or a skill we need to hone and nurture? I think we have to work at it, Are We Friends Yet illustrates how wide the starting point is when it comes to a taste of the world around us.

People wrangling in the Wild West of the 21st century is a phrase I have seen on Twitter recently. People wrangling, I think describes large scale people leadership in the world today, well definitely the UK that’s for sure! Building empathy or trying to teach the necessity of it whilst the example that everyone can see on TV, on the street, in the news is anything but empathetic worries me deeply. The fact that we are using the phrase people wrangling to describe how our leaders are trying to lead us is a mind-blowing addition to the vocabulary for 2019.

WRANGLING (ranglin) – engagement in a long, complicated dispute or argument.

So how do we vaccinate ourselves from mental health issues? I guess that’s the point of this blog in some ways, a recognition that issues that create ill health mentally can be contagious, and yet with help, with effort, with understanding can be prevented if only we can come together more. Diversity in how we are and who we are is important in how we create understanding and ultimately our ability to reach out to the ‘next man’ and offer support when we yawn and they catch our yawn!