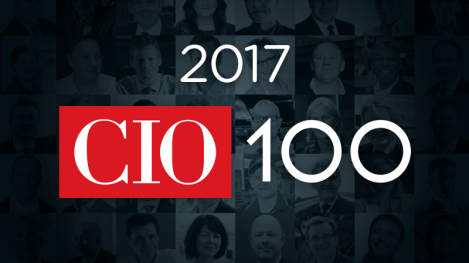 For the last five years I have been part of the CIO100, that is something I am extremely proud of. The role of CIO is something I believe passionately in and to be part of this group, to achieve membership to this rag-tag group of pioneers, leaders, misfits and general try hard, mean well human beings; well it means a huge amount to me…

And on the night you become the top of this pile, well you don’t get that much of a chance to explain why or how, so indulge me for a few short words whilst I do a Gwyneth Paltrow and Natalie Portman all in one on you, I hope it’s not that cringe worthy but some of the next short words may well make you, well, erm, cringe, sorry!

The CIO100 is a unique network of the most influential CIOs from the UK and across Europe. The group consists of digital leaders from a hugely diverse group of business areas, from private and public sector and from experiences that transcend background, gender, age, organisational ambition and ultimately even the concept of what a CIO is. And that is why this CIO100 is so important. Every year the team work tirelessly to create the list, judge the entrants and put on a networking event that brings the majority of the 100 together, that team deserve the first and biggest thank you, the CIO100 is, I think, the most relevant list of its type and this is entirely because of the credibility the team delivers it with.

I am lucky, so very lucky. Over the last decade in particular I have worked with some of the most inspirational leaders you will ever come across; first and foremost, Dr. Jonathan Sheffield of the National Institute of Health Research (NIHR) taught me how to make sure that the way we look from the outside has the biggest influence on how we grow from the inside. At the same time that I was in this role I also had the opportunity to be commissioned by Dr. Peter Knight, the man who, in my opinion, invented making politics work in digital health.

The NIHR was my first role as a CIO and I had an executive assistant known as Jessica Thomas. The reality is she was the original Donna Poulson from US show, Suits. In the show everyone needs a Donna, well in my role, everyone needs a Jessica. A CIO needs support, after all digital is the fastest paced business arena in any vertical and sometimes it’s hard to keep up; folks, go get a good support person, get a Jessica! I have myself a ‘new’ Jessica in Ireland though. I am very lucky to have found a second person who can make me look good on the worst of ‘bad hair’ days, Niamh Falconer, this one is just as much for you, and when you watch Suits you will know why you are also the second Donna!

I learnt my trade from so many ground breaking scallywags. Tom Dean, Dominic Hamilton and Andrew Chadwick first made me number four in their list of capable IT people, they were one, two and three and I managed a lowly number four. As four colleagues in the corner of a very big office they taught me humility and an ability to trust a team with a developed technology skill, and how to inspire them; through chocolate biscuits!

Twenty years ago I met two men who instilled a sense of proper, gentlemanly, leadership behaviours, Mark Hillman; a leader of high virtue who instilled in me a belief in people and their abilities. Even more so though, even now, the person who in the last twenty years of my career is still the most influential is a chap called Phil Randles; Phil is no longer with us, but I would describe what he did as ‘bringing me up’ to understand the way to work with people, perhaps the most important skill for any CIO, certainly one I know I still try to hone every day.

A CIO ‘preaches’ continuous learning to be successful. I learnt how to do this effectively from a formidable manager and expressively talented leader called Carrie Armitage. She gave me a chance to shine, to continue to learn and to be a leader. Even today in Ireland I can apply the things she taught almost daily to how I work and what I consider successful delivery to be. It’s so funny to meet her now, I am still a little afraid and yet still so keen to hear what she has to say to help steer where I go next.

In my role I get to work with the kind of people who are recognised as super intelligent. Professor Batchelor, the master of the beautiful slide as well as the most creative health technology leader to really deliver this stuff and Professor Ferguson, the most entertaining chair of any board I have ever come across, two people who have very kindly helped me shape my own CIO style.

Fran Thompson, for his belief and support in getting us to what we are trying to do. Tony O’Brien for teaching me, again, why I love what I do. Joanne Lonergan for listening, even when it’s just a bit too abstract, and to Hannah Gleave for helping me make it just a bit more Sci-Fi. Managing the intricacies that comes with organisational development of a group of technology professionals is always high on the list of challenges for a CIO, the help I get from Joyce Shaw is the only way this can be achieved by me in Ireland, she truly ensures the team builds and grows in the right direction every single day.

The number of people in the ‘field’ who never cease to amaze me is huge, but a few need a special mention as they make a difference to me and to what we are doing Ireland every day; Dermot Cullinan, Neil O’Hare, Brian McKeon, Dairin Hines, Pat O’Driscoll, David Wall and Mike O’Regan and so many more talented professionals deliver to the health system of Ireland every single day something that every CIO aspires to; a new meaning for the ‘I’ in CIO, inspiration.

Partnerships are key to being successful, it’s even part of the CIO100 questioning. I wouldn’t have been successful over the last year without the help of so many vendors that we have managed to turn into partnerships or just simple inspirational relationships; the team at WebDoctor.ie, TickerFit, Cerner Ireland, the team formerly known as CSC, the Microsoft Health gang, the chaps at ECHA, pTools, JSBDigital, Oracle Health, Clanwilliam, Ergo, Leading Social, Swift Queue and any number of others now working so hard to a common goal, better patient care for the people of Ireland.

So many of the CIO100 make a difference to me and the type of CIO I want to be; it’s a refreshed network that makes a difference. Joanna Smith, Rachel Dunscombe and Rachel Murphy are part of this list and they make sure that what a CIO does in health is above and beyond the norm and needs to be recognised and shouted from the rooftops of every hospital.

I’m getting towards the end I promise, the next thank you is back to the US TV references, in a recent poll US citizens said they would prefer Bartlett as president rather than the current incumbent, showing the West Wing as not a drama but a fairy tale wish that we all want to come true. Bartlett’s team make the show, and I managed, by accident, to find a person who is so many of the team rolled into one person; she is CJ on a Monday and Friday; she is Toby on Thursday; she is Josh on a Tuesday; she is Sam on a Wednesday and somehow she manages to be a Leo all of the time. Maria O’Loughlin is a true and constant inspiration for what we are striving to achieve, she keeps the role creative, she drives clear engagement in all that we are doing; reminding us regularly that we are delivering technology for the good of the patient and the clinician and not for the ‘fun’ of the new digital solution.

What makes a CIO really tick though has to be the diversity of influence; I have worked with some amazing people and continue to do so today, but family is the source of the most important inspiration. My mum will always be the influence that keeps me aware of what we are doing. In my role we are trying to use a phrase; it’s not healthcare its life, and whenever I talk to my mum about what I do this becomes a reality so much more. I am the happiest I can be being a CIO, I have been since that ‘fateful’ first day when I was asked to become the CIO of the National Institute of Health Research, and only one person has been on that journey with me throughout. In many ways this award is shared as much with her as the teams that have helped me be the CIO I want to be. No matter whether its dropping groceries in the supermarket isle at the shock news of becoming a CIO in Ireland or arranging the celebration meal at a restaurant decked out in cow-print to celebrate the first CIO role Alex has been with me the whole way, thank you so much Alex Corbridge.

An award like the CIO100 calls out one hundred people and each one represents a team. It’s not about the person in the list, the CIO, it’s not about the number in the 100, it has to be about the team that the CIO works with, for and around.

This award is for the team, and I’m proud to collect it for them.

Let’s get down to the craic agus ceol…