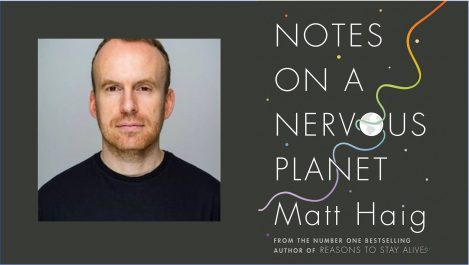 I love technology and how it has transformed the way we live today; so sitting in a Matt Haig event last week in sunny Leeds I began to feel like an interloper, an enemy of the ‘people’, like at any moment I would be found out and the audience would rise up against me and swing me from ‘the wall’ very much Handmaid’s Tale-esque.

Matt’s opening comments were very much about the speed of life today and the impact it has on us all. There is no denying what the speed that not just digital brings but the speed of change more generally. We now witness fast paced change in the political scene, the way in which social media impacts upon us all, even the instant gratification of things like Uber, Amazon Prime and Deliveroo, the effect these have on our lives is unrealised day to day.

We spend very little time simply waiting for something without distraction. A friend, an avid Twitter poster, recently commented that he was on the family summer holiday and camping. There were queues everywhere and little mobile signal, so people were actually talking to each other, although the irony wasn’t lost on others, that he was still posting this on Twitter!

Mental health (or rather a lack of it) is the biggest killer of men under 50 years of age! We call the collective for illnesses in this pandemic ‘health’ even though this is a misnomer that we hide behind. People die through a lack of understanding, a lack of support, a lack of diagnosis; they don’t die because they have ‘mental health’, that’s what we need to strive for, we want people to be mentally healthy!

The political mighty have taken it upon themselves to remove sugary drinks from most of the market place to attempt to remove the obesity issue threatening the kids of today. Yet what has the same intelligencer done about the support for the mental health of the same children? Very little yet! Anti-depressants are the fastest growing prescription drug in boys aged 11 to 14 in 2018, this figure floored me!

The pressure on the young of today outweighs anything anyone my age would have ever felt. Matt pointed out in his talk that when we were kids the need to fit in, the need to hide from the bully or even the annoying friendly chap, ceased to be there at four o’clock because we could go home and close our bedroom doors with only our parents and siblings to handle. Now the school and the peer groups’, friendly and unfriendly, follow children home. Social media brings us ever closer, so close that time away, time alone, is becoming the most treasured position. That unique opportunity we chased used to be connectivity and sharing, now it’s time unplugged and chance to breathe without so much connectivity a chance to just be.

When you interact with the next generation now how does it make you feel? What is the generation gap when it comes to mental health I wonder? A member of Matt’s audience asked about the definition and difference between nervousness and anxiety. He quickly compared the difference being the equivalent to hungry and starvation! For me nearing 45 years old, I thought that was quite an amazing way of considering the difference in how the younger generation will define the impacts on mental health – worlds apart. How many people under the age of 30 will exclaim that they are stressed, and how often will the ‘elderly statesman’ retort that they have nothing to be stressed about.

The way we consider mental health of people in the UK needs a fresh pair of eyes. We need to get to impacts and causes somehow.

My boss in Ireland used to talk eloquently about the health care system being a system of the sick not a health care system because it doesn’t do (isn’t able to do) prevention. The ‘shift left’ change to health care much talked up all over Europe now needs to be applied to the mental health of the people of the UK more than ever before. Matt gave a great example of Fiji in the mid-1990s, when they started to air US TV shows, ahead of doing this there were no eating disorders in Fiji. Anxiety was almost unheard of, but within five years, eating disorders grew to the ‘norms’ of the US and anxiety was at one point described as a pandemic. There are no official studies linking the two events, and as I have said already the world is changing at a high speed, but, it does make you pause for thought.

But there has to be hope, doesn’t there? When do we become aware of what makes us better? When do we apply that to the next generation of young people, harmed by the pressure the system applies to them to such a degree that society becomes malformed and somehow changes in how it treats the disease are never quite impactful. We have now accepted the term mental health as a phrase that is ok to use as an everyday description for a reason for school exclusion.

Matt asked the audience to ‘hear their own advice’, ‘it’s ok to be well one bit at a time’, ‘you can be a bit better’. We need a new acceptance, it’s ok to be at work with a cold, just don’t give it to me, and therefore it needs to be ok and supported to be at work or involved in activities with some mental health issues. How do we accept, understand and support mental health illness in the work place, in the school system, in the street in the same way as the common cold I wonder?

We have to do something, the speed of life isn’t going to slow down, I don’t want the speed of digital innovation to slow, which means it will continue to have an impact on our lives. I took another great little anecdote from Matt: digital and social is like ice cream! We can have a bit of what we love, and I love dearly chocolate and vanilla in the same bowl, but staying in bed on Saturday morning for four hours with a bath of chocolate and vanilla would not do any of us any good, the same goes for digital and social media I guess.

If we move our world forward just five years we need to be able to give ourselves some assurance that the digital world we create does good without causing harm. In my professional area we talk of patient centred design and portable data owned by the citizen but we also need to consider inclusivity and the bias associated to what digital brings. I am still excited for the future, our awareness is improving and I hope that this means we can get it right, evolve in a direction that is safe but also considerate of the wider impacts. Just maybe digital can be part of the cure not the problem.