eHealth Eco-System – From a different perspective… 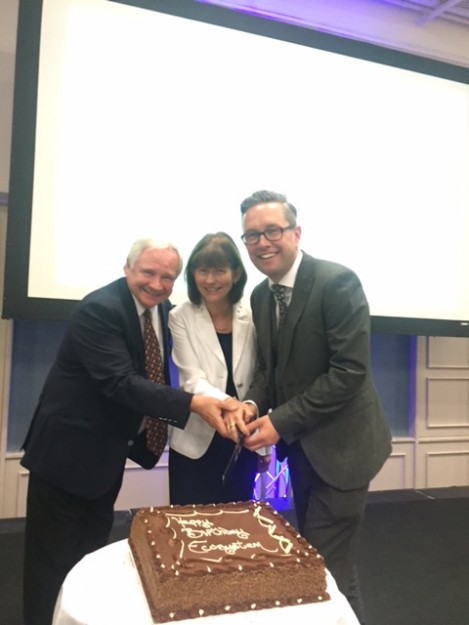 The eHealth Ireland Eco-System was a year old last week, a great achievement for the team to go from the germ of an idea to the formation of a self-supporting Eco-System that has seen the meeting of many ideas and organisations that have been able to be another hand on the tiller, steering the eHealth Ireland agenda.

As part of the birthday celebration meeting we have invited a different keynote speaker from a background outside of health, Niall Harbison, founder of Lovin’ Dublin, inspired the audience with his vision for an integrated Health system. Niall opened his presentation with a slide stating “The world is changing so fast” he brought the audience through a whistle stop tour of what it means to be in Social and Digital Media today in 2016 with a great emphasis on being mobile first.

Niall told us that over 90% of traffic is now via mobile. He spoke strongly on the importance of engaging with our stakeholders through different social media platforms such and commended us on our use of Twitter Hours and our transparency agenda for developing relationships.

Niall spoke about how we all need to be content masters. It’s up to all of us to inform our stakeholders in a way that interests them about what we are doing. It was refreshing to hear Niall speak about what he believed would be the future of health. He spoke about what it was like to not be clinically informed but that he would like to be able to see a future with telemedicine, where he can see a doctor when it suited him, where it suited him and be able to get his prescription sent to him electronically. Niall spoke about how he had great respect for all involved in health and their movement to digital.

He spoke about Apple and how even they, being a multi billion dollar innovation dynasty, have difficulties in mastering this market. The fact that we are trying to digitize something so large and disparate is a challenge and how its often much easier to start with nothing, he likened it to “herding cats”.

This is why he believed that the health innovations would actually emerge from countries where there is nothing currently there. Where they can adopt technologies and build new solutionsquicker. He also pointed to the fact that we can’t believe our stakeholders don’t want or expect this service or will not be able to use it and spoke of the quick adoption by taxi drivers of technologies such as UBER and Hailo and how people would have presumed that taxi drivers would never have adopted that technology

Niall spoke about where health was and asked us to consider what it would be like to pitch Health delivery as it is today in Ireland to Warren Buffet as a business idea, what investment did we think we would secure. If we can’t secure the idea of delivering health as it is done today then just maybe the answer could be a digital revolution was the noise left ringing in many peoples ears.

Niall finished on reiterating his first slide “The world is changing so fast. When will it happen to health?” and an inspirational quote from Michael Jordan;

“I’ve missed more than 9000 shots in my career. I’ve lost almost 300 games. 26 times, I’ve been trusted to take the game winning shot and missed. I’ve failed over and over and over again in my life. And that is why I succeed”

When experts from a wider digital field listen and speak to health audiences it always brings a refreshing and different challenge to what we think and do. Imagine being able to reform health at the speed of an organisation like Lovin’ Dublin has been able to form and become a house hold name. All through my own career I have pushed hard to ensure that we can learn as much as possible from other business arenas in health, after all the facts and figures from various studies point to health globally being way behind other businesses so there is clearly going to be something new to learn.

The eHealth Ireland agenda is not unique, but, it is now moving at a rate that requires a different type of support to see it succeed, one straight out of the innovation and new thinking kit back. In the words of Bob Wachter at a recent Kings Fund event,

The purpose of digitisation is not to digitise, but to improve quality, safety, efficiency and the patient experience of healthcare.

With that ringing in our ears we are ready for the next year!