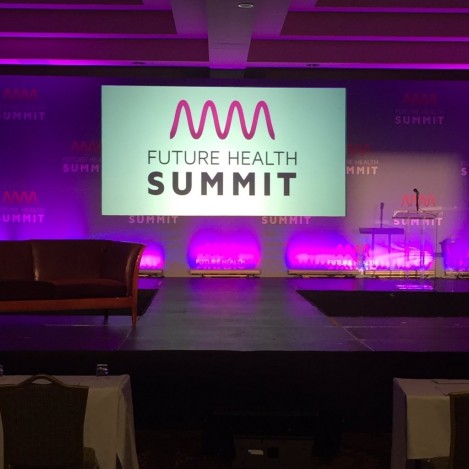 Thursday 25th of May 2016, The eHealth Festival rocked the stage at the Future Health Summit in City West. No festival would be complete without some audio visual fireworks and with this in mind, we opened with a powerful music video painstakingly produced by Elaine Naughton

The video, which wouldn’t have been out of place at the MTV awards, showcased different countries where music legends such as Bowie and The Beatles and neatly segwayed to all the countries where eHealth Legends came from. These countries included Estonia, Botswana, UK, Denmark, Spain, Australia and I have an honorable mention to my own Northern Ireland.  The scene was set for the day: High energy and involvement would be the recipe for a succesfull day. Twitter handles were provided so anyone could tweet the speakers and ask questions using the hashtag: #eHealthFestival. Notably, we were trending in Ireland within the hour.

The speakers for the day embraced the festival theme and played the part of rockstars by choosing their own song to enter onto the stage. Musical references were dotted throughout the presentations some of our Rockstars-for-the-day even dressed up in festival gear to present.

First up to speak was Tony Shannon and Andy Williams from Answer Consulting. They spoke in detail about the critical state of health around the world and how effective sharing of information can mean better care for the patient. Andy spoke about how transformation is needed in digital health and it is his belief that a huge transformation will happen in 5 years or less. He spoke about the importance of open source and the growth in demand witnessed in just the last year alone.  Richard Corbridge reiterated their thoughts and argued that  health spend is actually an investment for the future rather than just a short term budget item.

The next rock star on the bill was Andy Kinnear. Andy gave great insights from his learning in the digital transformation journey in Bristol. The countless benefits they are reaping now include the amazing research opportunities that become available through a shared network. When I asked Andy about how to create a culture that encourages innovation, he replied that“ You need to create a spirit where loyalty is with the people you serve  – the public not the organisation. You should reinforce this mind-set that all you do is for the patients.” It is heartening for me to see that this is exactly what eHealth Ireland are doing by putting their patient: at the centre.

Naomi Fein from Think Visual took to her new found rock star status like a duck to water as she ran up and down the stage interacting with the audience. I have had the pleasure of working with Naomi on a few projects and she is truly inspirational. Naomi spoke to us about leveraging empathy to create clarity. She took everyone through an interactive process ensuring that any plans that we make are truly impactful. The message must be “memorable, actionable, and shareable”.  To ensure this we need to start this (planning) process before we communicate by asking –

If we can do this with empathy for our audience it can give us fresh insights, new language and clearer priorities. Naomi’s fiinal piece of advice was: Before communicating, it is imperative to separate between what is true but useless, and what is relevant.  This last point was particularly poignant because I feel that often times, we ourselves are overawed with too much information.

Joanna Smith, CIO of Royal Brompton Trust was next up and she set the scene by entering to The David Bowie number “Changes”. She spoke about her experiences within digital transformation in health. She had a lack of engagement at the beginning of her journey as they had no strategy or plan. Joanna used the analogy of growing a garden and how they had to strip everything away, draw up a plan and get the basics right before they could change their system. The now familiar theme of the patient being at the centre was spoken about again and how important it is to have easily accessible and user friendly technology.  Joanna also argued that patients should be widely informed as they are interested in these technological advancements. Joanna echoed the importance of building relationships: a common theme from all the speakers and how she felt that one of the biggest challenges is managing change and trust. She gave some great advice on picking your battles, knowing when to give up and knowing when to push a head. In my own experience, this sound advice could apply to many things in life, including raising children.

Julie Bellew and Brian Canavan from the HSE were late additions to the bill after the successful launch of #eHealthMoments.  I have had the pleasure of working with this team to develop this idea. It is based on the premise that internal communication is central to how an organisation is run. Up to 70% of Organisational change fails and one of the more commonly cited  reasons for this failure is poor communication. This internal communication is truly engagement from within and was developed when both these members of staff were inspired at an All Staff Day in March. The concept is based on “Hello My Name is” created by Kate Grainger. Each member of staff can make a short video clip about who they are and what they do. These clips are uploaded to a private forum created for these staff. Previously there was no real link between the staff as they are traditionally dispersed throughout the country and rarely get to meet. This provides everyone the chance to introduce themselves, put a face to the name and get to know a little bit more about each other. Julie and Brian want to change people’s opinion of the HSE and want to make it fun as they do it. I was sitting beside a few of the speakers at the time of this presentation and they loved it. They took pictures and said it was an initiative they were going to bring back to their own organisations and was so simple but extremely effective.

After lunch Richard Gibson, research director at Gartner spoke about personalisation with healthcare and the importance of patient engagement. He explained how simple technologies like websites can help engage by providing information and portals connecting patients with their information. Richard spoke of many cool technologies that provide great advantages to the user such as fitness trackers, sleep wristbands, devices that keep track of your habits and home diagnostic stations: All technologies that are revolutionising how we live our lives.

We had the lovely Amanda Neylon  up next, who danced onto the stage with the song “What a Feeling” from Flash Dance. Amanda was in charge of the digital transformation of Macmillan Cancer Care support. She told an inspirational story about her journey there.  The purpose of the organisations was to support people and help them take control of their situation. To do this they took a huge amount of paper information and made 50% of it available through digital services. Social Media put digital at the heart of the organisation. She echoed Naomi by stressing that “you must understand your audience” and through this understanding they segmented their audience through behaviours rather than demographically.  Amanda also spoke about the importance of collaboration, iteration and evaluation through all the different stages. Her final word was to be brave and allow people the opportunity to grow through experimenting with what works and what doesn’t.  If things don’t work the first time around, simply move forward and try something new.

Clare Sanderson (@IGcom) from IG Solutions was our final presenter and was representing the security and governance side of the festival. She also spoke around the importance of engaging with the public early and informing them on each of the stages you are going through. There is great opportunity to learn from other people’s mistakes by being up front with patients about where their information is going.  Research conducted by The Wellcome Trust found that people generally didn’t know where their information is going. Clare spoke about a really interesting concept called Citizen Juries. During this process people hear case studies around the use of data by health care professionals. This process proved that the more information a patient has around the digital transformation, the more positive they are about it. Clare also pointed out an extremely important issue: that there should be explicit consent and the right to object. I asked Clare about the best ways to do this and she gave some interesting ideas such as having the issue as a story plot on popular TV shows. Maybe we could ask Richard’s agent to arrange a cameo on Fair City.

The finale of the show was a panel discussion with the A&R personnel namely vendors – Cerner, CSC, IMS Maxims and HCI. Richard asked the panelists to sell to the audience on why their company should be the one to push forward this transformation in eHealth. Many of them touched on the fact that Ireland could be built as a centre of eHealth excellence and the importance of the integration off different systems.  They echoed the importance of being engaged with patients early and ensuring that they go through the decisions with you, putting healthcare back into their hands and also the belief that data sharing is a common sense approach.

Richard rounded up the day with the reiteration that community is an area often forgotten yet it is crucial to the development of eHealth. He spoke about delivering everyone in the HSE a digital identity and how the HSE is opening up to innovation through eHealth Connect  and The Quality Innovation Corridor (QIC). This was a very positive end to an extremely positive day. I spoke to a number of people after the event and they were delighted with the festival there was great energy, enthusiasm and optimism around the future of eHealth in Ireland. It really is amazing to have been part of this day and I want to say a big thank to Richard for giving me the opportunity me to co-host the event with him. I look forward to seeing how the ehealth transformation continues to evolve in the near future.

For more information on what is happening in eHealth in Ireland go to www.eHealthIreland.ie

SPEACIL THANKS to Blathnaid Cluskey who is interning at the HSE she is a Communications Student at DCU. She has a strong passion for media and using it to connect with different audiences and helped ensure that it was possible to create this review of the day.