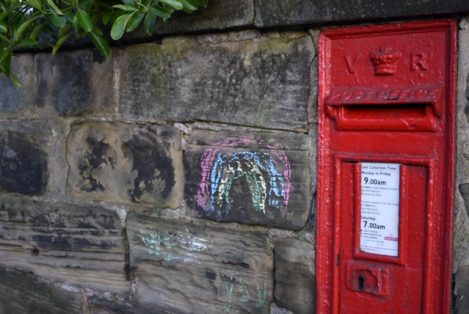 My one piece of regulation exercise took me past the ordinary but beautiful picture in the headline of this blog earlier this week, it made my eyes water as I continued to walk on and think of just where are we now.

The picture really does ‘say a thousand words’ to me. I thought I would try to capture those words here and reflect on just where we are as we slip in to April 2020, an April like none ever before.

For different reasons in the past I have traditionally turned to the Prince song from Parade, Sometimes it Snows in April as the start of spring landed on us, this year the song has a different symbolism to me, the proverbial ‘snow’ is definitely not something we expected and the impact of it is just unknowable…

So, the two symbols in the picture, the rainbow of thanks being drawn all over the UK for health and care workers of all types, grades and positions and the letter-box, in this case for me, a symbol of the need for a continued drum beat of regular communications. Gratitude and staying in touch with the world in April 2020 are perhaps the two pillars of our new normal society, or at least they need to be and for me that connection to people is something I strive daily.

How we work is under our own microscope now, I know I am a people person, a person who needs connection, grounding to normal to be able to achieve. As we now sit in isolation working in teams that say hello down a video link its so much harder and its definitely not as much fun, but as each day passes we find that new way of making it work. Staying creative and thoughtful and inspired is much harder I am finding, and yet I am getting so much more physical output… something I don’t understand yet.

My organisation is pushing a campaign across social media, #PrescribeKindness. For me this fits so well with what we are trying to create as our normal. If everyday I can find a way to ask, to insist on a new piece of kindness being put in place then I feel like the worth I add to the day is there.

On walks now people, the right distance apart, have started to acknowledge each other again, that Yorkshire trait of saying good morning to everyone is alive and growing in strength, that simple good morning though is a prescription of kindness to some. The local supermarket giving every customer an orchid as they left, another example of the kindness now being displayed, a simple show of acknowledgment that once back in your home it is the same four walls that we now have to stare at.

Watching kids cope with the new normal fills me with some fear I have to say, ‘war time’ mentality requires a shift in focus from individualistic proof points to a focus on the many, a protectionism for the locality not for the singular. Our kids of today are not used to that, culture has taught them to be careful of themselves first and foremost and now we ask that they take action that doesn’t always feel fair, action that impacts upon them, not for their good but for the good of the many. That’s a big change to ask for in a short period of time without the usual peer support needed as mind-set change happens. And that’s the bit that worries me, not the change but the lack of support from others during this change.

In the last few years the ‘social bubble’ and its impact has been spoken about a great deal, why is it that I know very few Brexit Leavers, because of my social bubble, my normal feeds me with like minded people, in isolation, in times of crisis we need to push harder still to ensure that those of us still building our own views of the world, our own starting points, have access to as wider view of everything as possible, breaking the social bubble is going to be a lot trickier in isolation than walking into classrooms, onto the football pitch and into the playgrounds.

There are decades where nothing happens; and there are weeks where decades happen.   Vladimir Ilyich Lenin

This is what we are faced with now, weeks where decades worth of change are happening across the entire globe. Forget the strangeness and unpredictability of Trump and Brexit happening, instead these are mere blips in the change that happened just last week.

Take words being used to describe the race to digital healthcare now; in the next ten days we have made decisions that will see the next ten months change faster than the last ten years. But, every change decision made will have implications for the next ten years! A new speed that is surely welcome, but a speed that requires somebody to have a considered eye on the ramifications of next…

The speed we race to normal is confused; normal suggests a return to where we were but I just can’t see how that can be so, the phrase new normal is being thrown around a lot, and I hope that’s where the kindness and communication come in. What will all of our perception of the new normal be, for me a focus on people will be my first normal I want to recreate. I remember before the crisis having a number of conversations that experiences had taken over from ‘stuff’ in the desirability box, I think that we will find in the new world connections and time to build those connections will become more and more what people strive for. I want to know who my neighbours are in the new world, not just have a nodding acquaintance with half of them.

I used the Prince classic to start this bit of reflection, I guess its ok to use it to finish the piece too, the closing lines of the song are;

All good things they say, never last, And love, it isn’t love until it’s past.

For me that feels like a useful, if not slightly dramatic view of the past, we had no idea what we had until it was taken away, and now its gone we will work out what we need in the new normal.

But, lets think through #NewNormal together and carefully….